Home » Windward Passages » Should You Be Concerned About Inflation?

Should You Be Concerned About Inflation?

If you pay attention to financial news, you are probably seeing a lot of discussion about inflation, which has reared its head in the U.S. economy after being mostly dormant for the last decade. In May 2021, the Consumer Price Index for All Urban Consumers (CPI-U), often called headline inflation, rose at an annual rate of 5.0%, the highest 12-month increase since August 2008.1 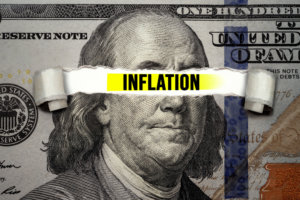 The CPI-U measures the price of a fixed market basket of goods and services purchased by residents of urban and metropolitan areas — about 93% of the U.S. population. You have likely seen price increases in some of the goods and services you purchase, and if so it’s natural to be concerned.

The larger question is whether these price increases are temporary, caused by factors such as supply-chain issues and labor shortages that will be resolved as the economy continues to emerge from the pandemic, or whether they indicate a fundamental imbalance that could cause widespread long-term inflation and hold back economic growth.

Most economists — including Federal Reserve Chair Jerome Powell and Treasury Secretary Janet Yellen — believe the current spike is primarily due to transitory factors that will fade in the coming months. One example of this, cited by Powell in a recent press conference, is the price of lumber.2-3

Early in the pandemic, many lumber mills shut down or cut back on production because they expected a major slowdown in building. In fact, demand for housing and home renovation increased during the pandemic, as many people who worked from home wanted more space, a different location, or improvements to their current homes. Low supply and high demand sent lumber prices soaring.4

Sawmills geared up as quickly as they could and were reaching full capacity just as demand began to ebb, with builders cutting back due to high prices and homeowners using their discretionary income to buy other goods and services. Suddenly the supply exceeded demand, and prices began to drop. Wholesale lumber prices are still higher than before the pandemic, and it takes time for price drops to filter down to the retail level, but it’s clear that the extreme inflation was transitory and has been reversed. The lumber story also suggests that consumers and businesses will cut back on spending for a product that becomes too expensive rather than spend at any price and feed an inflationary spiral.5

Another example of pandemic-driven imbalance between supply and demand is used car and truck prices, which have skyrocketed almost 30% over the last 12 months and represent a substantial portion of the overall increase in CPI. Used vehicles are hard to find in large part because fewer new cars are being built — and fewer new cars are being built because there is a shortage of computer chips. A single new car can require more than 1,000 chips, and when auto manufacturers were forced to close their factories early in the pandemic and new vehicle sales plummeted due to lack of demand, chip manufacturers shifted from producing chips for cars to producing chips for high-demand consumer electronics such as webcams, phones, and laptops.6-8

As the economy reopened and the demand for cars increased, chip producers were unable to shift and increase production quickly enough to meet the needs of auto manufacturers. The chip shortage is expected to reduce global auto production by 3.9 million vehicles in 2021, a drop of 4.6%. Unlike lumber, the chip shortage may take some time to resolve, because chip manufacturing is a long, multi-step process and most chips are manufactured outside the United States. The federal government has stepped in to encourage U.S. manufacturers to build new facilities and increase production.9

Imbalances between supply and demand are to be expected as the economy reopens, and most such imbalances should work themselves out in the marketplace. But other forces could fuel more extensive inflation. Massive federal stimulus packages have provided consumers with more money to spend, while ongoing stimulus from the Federal Reserve has increased the money supply and made it easier to borrow.

Although unemployment is still relatively high at 5.9%, millions of jobs remain open as workers are hesitant to return to positions they consider unsafe in light of the pandemic, are unable to work due to lack of child care, and/or are rethinking their careers in a post-pandemic world.10-11 This may change in September as extended unemployment benefits expire and children return to school, but the current imbalance is forcing many businesses to raise wages, especially in lower-paying jobs.12

The increases so far are primarily “catching up” after many years of low wages and should be absorbed by businesses or passed on to consumers with moderate price increases.13 However, if wages and prices increase too quickly and consumers earning higher wages are willing to spend regardless of rising prices — because they expect prices to rise even higher — the wage-price inflation spiral could be difficult to control.

When considering the current situation, it’s helpful to look at other measures of inflation.

Base effect. On a purely mathematical level, high 12-month CPI increases in March, April, and May 2021 reflect the fact that the CPI is being compared with those months in 2020, when prices decreased as the economy closed in response to the pandemic. This comparison to unusually low numbers is called the base effect. To avoid this effect, it’s helpful to look at annualized inflation over a two-year period, comparing prices now with prices before the pandemic. By that measure, current inflation is about 2.5%, a little higher than the average over the last decade but not nearly as concerning as a 5.0% level.14

Core inflation. Prices of some items are more volatile than others, and food and energy are especially volatile categories that can change quickly even in a low-inflation environment. For this reason, economists tend to look more carefully at core inflation, which strips out food and energy prices and generally runs lower than CPI-U. Core CPI rose at an annual rate of 3.8% in May 2021, which sounds better than 5.0% until you consider that it is the highest core inflation since June 1992. The good news is that the 0.7% monthly increase from April to May was lower than the 0.9% rise from March to April, suggesting that core inflation may be slowing down.  (The CPI-U increase also slowed in May, rising 0.6% for the month after a 0.8% increase in April.)15

Sticky prices.  Another helpful measure is the sticky-price CPI, which sorts the components of the CPI into categories that are relatively slow to change (sticky) and those that change more rapidly (flexible). The sticky price CPI increased just 2.7% over the 12-month period ending in May 2021. By contrast, the flexible component of the CPI increased 12.4% over the year.16 This suggests that a variety of factors — such as problems with supply chains, labor, and extreme weather — may be moving prices on flexible items, but that underlying economic forces are moving more stable prices at a relatively moderate rate.

The Federal Open Market Committee (FOMC), an arm of the Federal Reserve, is charged with setting economic policy to meet its dual mandate of fostering maximum employment while promoting price stability. The Fed’s primary economic tools are the benchmark federal funds rate, which affects many other interest rates, and its bond-buying program, which injects liquidity into the economy. Put simply, the Fed lowers the funds rate and buys bonds to stimulate the economy and increase employment, and raises the rate and stops buying bonds or sells bonds to put the brakes on inflation.

The federal funds rate has been at its rock-bottom range of 0.0% to 0.25% since March 2020, when the Fed dropped it quickly in the face of the pandemic, and the Federal Reserve is buying $120 billion in government bonds every month, much less than it did early in the pandemic but still a substantial and steady injection of money into the economy.17 (Unlike an individual or a regular bank that must spend money to purchase bonds, the central bank buys bonds by creating an electronic deposit in one of its member banks, thus creating “new money” that can be used to lend and circulate into the economy.)

Some inflation is necessary for economic growth — without it, an economy is stagnant — and in 2012, the FOMC set a 2% target for healthy inflation, based on a measure called the Personal Consumption Expenditures (PCE) Price Index. The PCE price index uses much of the same data as the CPI, but it captures a broader range of expenditures and reflects changes in consumer spending.

More specifically, the FOMC focuses on core PCE (excluding food and energy), which remained below the 2% target for most of the last decade. In August 2020, the FOMC changed its policy to target an average PCE inflation rate of 2% and indicated it would allow inflation to run higher for some time to balance the time it ran below the target. This is the current situation. Core PCE increased at a 12-month rate of 3.4% in May 2021, but so far the Fed has shown little inclination to take action in the short term.18 The FOMC projects PCE inflation to drop to 3.1% by the end of the year and to 2.1% by the end of 2022.19

At its June meeting, the FOMC did indicate an important shift by projecting the federal funds rate would increase in 2023 to a range of 0.5% to 0.75%, effectively two quarter-point steps.  (In March, the projection had been to hold the rate steady at least through 2023.) Fed Chair Powell also indicated that the FOMC has begun “talking about talking about” reducing the monthly bond purchases.20 Neither of these signals suggests any immediate action or serious concern about inflation. However, the fact that the funds rate remains near zero and that the Fed continues to buy bonds gives the central bank powerful “weapons” to employ if it believes inflation is increasing too quickly.

The next few months may indicate whether inflation is slowing down or changes in monetary policy are necessary. Unfortunately, prices do not always come down once they rise, but it may be helpful to keep in mind that prices of many goods and services did decline during the pandemic, and the higher prices you are seeing today might not be far out of line compared with prices before the economic slowdown. As long as inflation begins trending downward, it seems likely that the current numbers reflect growing pains of the recovery rather than a long-term threat to economic growth.

U.S. Treasury securities are backed by the full faith and credit of the U.S. government as to the timely payment of principal and interest. The principal value of Treasury securities fluctuates with market conditions. If not held to maturity, bonds could be worth more or less than the original amount paid. Projections are based on current conditions, are subject to change, and may not come to pass.

This content is provided by Windward Private Wealth Management Inc. (“Windward” or the “Firm”) for informational purposes only. Investing involves the risk of loss and investors should be prepared to bear potential losses. No portion of this blog is to be construed as a solicitation to buy or sell a security or the provision of personalized investment, tax or legal advice. Certain information contained in the individual blog posts will be derived from sources that Windward believes to be reliable; however, the Firm does not guarantee the accuracy or timeliness of such information and assumes no liability for any resulting damages.

Windward is an SEC registered investment adviser. The Firm may only provide services in those states in which it is notice filed or qualifies for a corresponding exemption from such requirements. For information about Windward’s registration status and business operations, please consult the Firm’s Form ADV disclosure documents, the most recent versions of which are available on the SEC’s Investment Adviser Public Disclosure website at www.adviserinfo.sec.gov.