Your domicile is the state where you maintain your legal residence. Domicile is determined by intent, rather than by the length of time you spend in a state.

You may establish a state as your 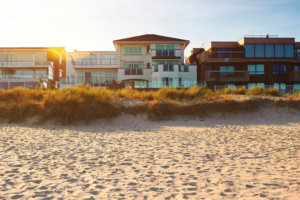 domicile the first moment you occupy property there, provided your intent is to return there if you go away. You have only one domicile, although you may have more than one home.

Example(s): Fred, who lives in New Mexico, takes a new job in Arizona. He establishes a temporary residence there until the end of the school year when his wife and children will join him.

Your domicile is not formally registered anywhere, but if you want to change it, you should be prepared to convince the authorities of any state which may be negatively affected by your change of intent.

Example(s): Frank changes his state of domicile from Massachusetts, a state with income taxes, to New Hampshire, a state without income taxes. He prepares to convince the Massachusetts Department of Revenue, if called upon, that he’s made a legitimate change of domicile by renting a home in New Hampshire, getting a driver’s license and registering his car there, and also registering to vote there.

Example(s): Jane relocates from Atlanta to Boston to attend graduate school. She intends to return to Atlanta when her education is complete. Georgia is her state of domicile.

Even if Jane remains in Boston for many years earning several advanced degrees, Georgia is her state of domicile for the entire period as long as she intends to return there.

Suppose, while living in Boston, Jane decides she won’t return to Atlanta but would like to make Vermont her state of domicile. She would have to travel to Vermont and have the appropriate mental intent while physically present there.

Tip: If you’re a statutory resident of one state and claim another state as your domicile, your state of domicile may require you to file a tax return there as well.

Why is your domicile important?

Your domicile is important because it affects the following:

You must meet the following requirements to claim a state as your domicile:

If you’re a naturalized citizen, your domicile is usually the state where you became a citizen, unless you marry a citizen domiciled in another state.

Tip: There is one exception to the physical presence requirement. If you marry a person domiciled in another state, you may be able to claim your spouse’s state of domicile as your own, even if you’ve never set foot there.

It isn’t necessary to do any of the following in order to claim a state as your domicile. However, you might want to do some or all of them to prove that you intend to make that state your domicile:

If your state of domicile is important to you for specific reasons, such as state income tax, the effect of state property laws, or state tuition rates, you may want to consult an attorney. The specific facts regarding your domicile that you will need to establish may vary depending upon the benefit that you are seeking.

There are only two requirements to change your domicile: (1) you must be physically present in that state, and (2) you must intend to make it your permanent home. In order to prove your intent, you may also want to take some or all of the actions mentioned above.

The most important point to remember when claiming a state as your domicile is that you should be consistent. Inconsistency is the single biggest mistake you can make regarding domicile.

Example(s): Melissa chooses Oregon as her state of domicile. She doesn’t keep her California driver’s license or vote in New Mexico, where she has a second home.

Your income may be taxed in two states

Your income may be taxed in your state of domicile or the state where you earned it, or both.

You may need to file part-year returns

If both your present and former states of domicile tax income and if you move on any day other than the first of January, you’ll have to file part-year returns in both states.

Your choice of domicile can affect state death taxes

This blog is provided by Windward Private Wealth Management Inc. (“Windward” or the “Firm”) for informational purposes only. Investing involves the risk of loss and investors should be prepared to bear potential losses. No portion of this blog is to be construed as a solicitation to buy or sell a security or the provision of personalized investment, tax or legal advice. Certain information contained in the individual blog posts will be derived from sources that Windward believes to be reliable; however, the Firm does not guarantee the accuracy or timeliness of such information and assumes no liability for any resulting damages.

Windward is an SEC registered investment adviser. The Firm may only provide services in those states in which it is notice filed or qualifies for a corresponding exemption from such requirements. For information about Windward’ registration status and business operations, please consult the Firm’s Form ADV disclosure documents, the most recent versions of which are available on the SEC’s Investment Adviser Public Disclosure website at www.adviserinfo.sec.gov.